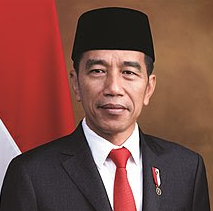 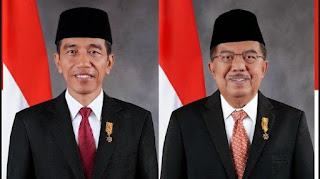 On 22 July, hours before the announcement of the election results, Prabowo withdrew. Jokowi's victory was expected and realised hours later. The General Elections Commission (KPU) gave him a close victory with 53.15% of the vote (almost 71 million votes), to Prabowo's 46.85% (62 million votes), though Prabowo's camp disputed these totals.
After his victory, Jokowi stated that growing up under the authoritarian and corrupt New Order regime, he would have never expected someone with a lower-class background to become president. The New York Times reported him as saying, "now, it's quite similar to America, yeah? There is the American dream, and here we have the Indonesian dream".
Jokowi was the first Indonesian president outside the military or the political elite, and the political commentator Salim Said gave the popular view of the politician as "someone who is our neighbour, who decided to get into politics and run for president".
2019
In 2018, Jokowi announced that he would run for re-election next year. His vice president Jusuf Kalla was not eligible for another term because of the term limits set for president and vice president. Kalla had already served a five-year term as vice president during Susilo Bambang Yudhoyono's first term (2004–2009).
Speculation surrounding Jokowi's choice of running mate focused on several candidates, including Mahfud MD, a former defence minister and chief justice of the Constitutional Court. In a surprise move, Jokowi announced that Ma'ruf Amin would be his running mate. Mahfud had reportedly been preparing for the vice-presidential candidacy. 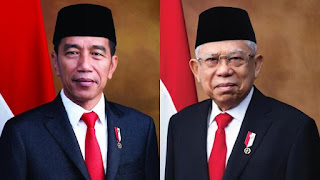 Ma'ruf was selected instead following a push by several constituent parties of Jokowi's governing coalition and influential Islamic figures. Explaining his decision, Jokowi referred to Ma'ruf's extensive experience in government and religious affairs.
The KPU officially announced that the Jokowi-Amin ticket had won the election in the early hours of 21 May 2019. The official vote tally was 85 million votes for Jokowi (55.50%) and 68 million votes for Prabowo (44.50%).
Supporters of Prabowo protested in Jakarta against the result, and it turned into a riot which left eight people dead and over 600 injured. Following the protests, Prabowo's campaign team launched a Constitutional Court lawsuit but was rejected in its entirety.
Family and personal life of  Joko Widodo
Jokowi married his wife Iriana in 1986. The couple has two sons and one daughter. Their first son, Gibran Rakabuming Raka (born 1 October 1987), studied abroad in Sydney and Singapore (at the Management Development Institute of Singapore, MDIS) and currently runs a catering and wedding-planning business in Surakarta.
Their only daughter, Kahiyang Ayu (born 20 April 1991), completed an undergraduate degree in food technology at the state-owned Sebelas Maret University in Surakarta. Their second son, Kaesang Pangarep (born 25 December 1994), completed his high school years in ACS International, Singapore, and is an online vlogger.
Jokowi has four grandchildren: a grandson and a granddaughter from Gibran (born in 2016 and 2019 respectively) and a granddaughter and a grandson from Kahiyang (born in 2018 and 2020 respectively).
Several members of Jokowi's family have declared their intentions to enter politics by running as candidates in 2020 local elections. Gibran has declared his candidacy for the mayorship of Surakarta, in addition to his son-in-law Bobby Nasution (Medan) and brother-in-law Wahyu Purwanto (Gunung Kidul Regency).
Jokowi has been described as "Muslim but broadly secular in his outlook". His statement in 2019 that religion and politics should be separated prompted a public debate on whether he was promoting secularism in the country.
In June 2013, a film titled Jokowi, depicting Jokowi's childhood and youth, was released. He expressed some objections to the film, saying that he felt his life had been a simple one and was not worthy of being adapted into a film.
According to The Economist, Jokowi "has a penchant for loud rock music" and owned a bass guitar signed by Robert Trujillo of heavy metal band Metallica which was confiscated by the KPK.
In November 2017, Danish Prime Minister Lars Løkke Rasmussen, who was on an official visit to Jakarta, gave Jokowi a Metallica Master of Puppets vinyl box set as a diplomatic gift.
It was signed by the band's drummer and co-founder, Lars Ulrich, a Danish native. Under his policy of transparency, Jokowi paid IDR 11 million ($800) out of his personal funds to claim the record, which had been declared a state asset to avoid accusations of gratification.
He has also been noted by many to be very similar in appearance to former US president Barack Obama.
Jokowi is a silat practitioner. He had been practicing Setia Hati Terate style from Persaudaraan Setia Hati Terate school since his time at junior high school and eventually mastering it. He attained first degree pendekar warga rank of the silat school on 16 November 2013.
Joko Widodo Short Data
7th President of Indonesia
Vice President Jusuf Kalla (2014–2019), Ma'ruf Amin (2019–present)
Born 21 June 1961 (age 60) Surakarta, Central Java, Indonesia
Political party PDI-P
Spouse Iriana ​(m. 1986)
Children Gibran Rakabuming Raka, Kahiyang Ayu, Kaesang Pangarep
Parents Widjiatno Notomiharjo (father) and Sudjiatmi (mother)
Elections 2005 mayoral, 2010 mayoral, 2012 gubernatorial, 2014 presidential (campaign, inauguration) 2019 presidential (campaign, inauguration).
Policy Bali Nine, High-speed rail, Trans-Sumatra, New capital, Sea Toll Program, Omnibus Law.
Summits
ASEAN Summit, G20 (2014, 2015, 2016, 2017, 2019, 2020, 2021), APEC (2014, 2015, 2016, 2017, 2018), Presidential trips.
Source: https://en.wikipedia.org/wiki/Joko_Widodo